As noted in my previous post, I’m attending a conference in Columbus, Ohio. While getting my morning coffee, I noticed a photograph on the auditorium wall. This hundred-year-old photo struck me as a particularly apt visual metaphor for the blogosphere: 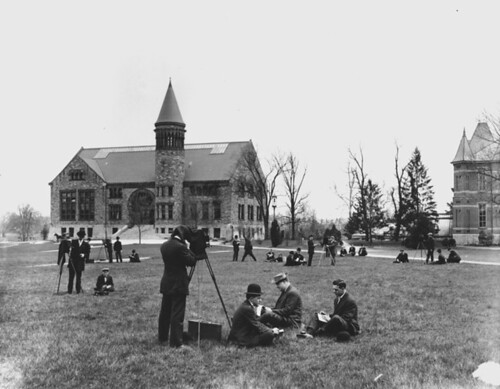 Look carefully. Here we have photographers, the ‘bloggers’ of the early 20th century, documenting their surroundings. But what are they actually doing? They’re taking pictures of each other. And someone (the metablogger?) is taking a picture of the lot of them. It’s the photogosphere! Each photographer is creating something unique by building — in a very literal sense — on the work of other photographers. And isn’t that, at least in large part, what we bloggers do?

New Top Technologies Every Librarian Needs to Know is available for order from Amazon and the ALA Store.

Beyond Reality: Augmented, Virtual, and Mixed Reality in the Library is available for order from Amazon and the ALA Store.

What technologies should every librarian and manager know about?
More Information
Buy at Amazon

A step-by-step tutorial to getting started with Drupal as your library's content management system.
More information
Buy at Amazon